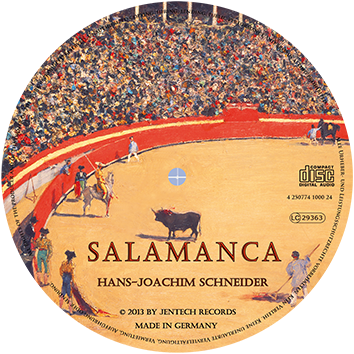 Whoever visits Spain will learn to love it. This happened to me in Seville in 1991 during Semana Santa. Many other cities in Spain followed, each more beautiful than the next. But the most beautiful of all is probably Salamanca. Not too small so that you don't discover something new there every day, and not too big so that you don't feel at home. And if you look for love there, you will find it. The best time is probably September with its Feria in honor of the Virgen de la Vega. From there it is not very far to Segovia with its medieval castle Alcazar and the Sierra de Candelario. The tracks on this CD are dedicated to these and other magical places such as the Jardin del Generalife in Granada or the endless expanse of La Mancha. Spanish rhythms and melodies are combined with the style of classical music. It is precisely this idiosyncratic mixture of composition and arrangement that should musically open up this world of 1000 and one nights to you. Embark on a musical journey through my Spain with this CD. It contains the newly recorded and musically and sound-technically revised titles from the 2012 edition. Many thanks also go to Sofia Lavista Llanos (Argentina) for the lyrics to La Castaña and Jackie Vicente (Peru) for the magical singing.